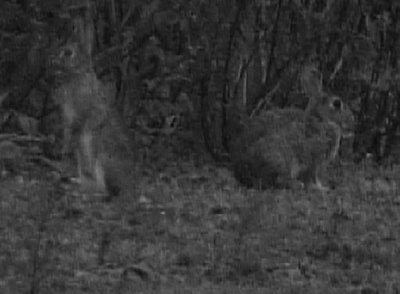 The Aztec moon god, was sometimes pictured as a rabbit, whilst Chinese, Japanese and Korean lore all feature a rabbit in the moon. Tonight’s new moon however, has been totally rabbit free. Ne’er a bushy tail nor quivering nose to be seen for miles.

These marshes are like a giant Swiss cheese, hollowed, tunnelled and undermined by the fervent digging of this wanton army. They have colonised so many a path and earth bank that it’s a wonder all the water in the lagoons has not drained away. Every twilight step is usually accompanied by a speedy blur as singletons and sometimes entire families, leg it at my approach.

Is their absence perhaps the result of some unknown effect of lunar gravity? With so many predators around, perhaps its simply a question of staying safe on the darkest night (When there’s no big rabbit in the sky to watch over them).